Once all the walls in the kitchen and bath came down, we had to quickly figure out the electric situation. We knew we needed a new panel. Why? Well, because we had 1950s fuses, similar to this:

So we had to upgrade to a circuit breaker box and we figured we would increase the amps while we were at it.

Mr. Bunches had 3-4 electricians come out to give us quotes on a lot of electrical work. Before the first one arrived, though, we made a plan of everything we wanted done. I even created a detailed list so that we could give it to the electricians and also know that we weren’t forgetting anything:

This list is actually shorter than it started–Mr. Bunches found that the original list seemed to scare away some of the electricians. One guy looked at it and said the kitchen alone would cost $8,000-$10,000. To say we had a little panic attack would be putting it mildly. But we just kept getting more electricians in to look at the work and eventually got some real quotes.

When we were getting quotes, we didn’t know if all the wiring in the kitchen needed to be replaced or not. Here’s a reminder of what it all looked like with the walls down (note all the criss-crossing wires in the ceiling): 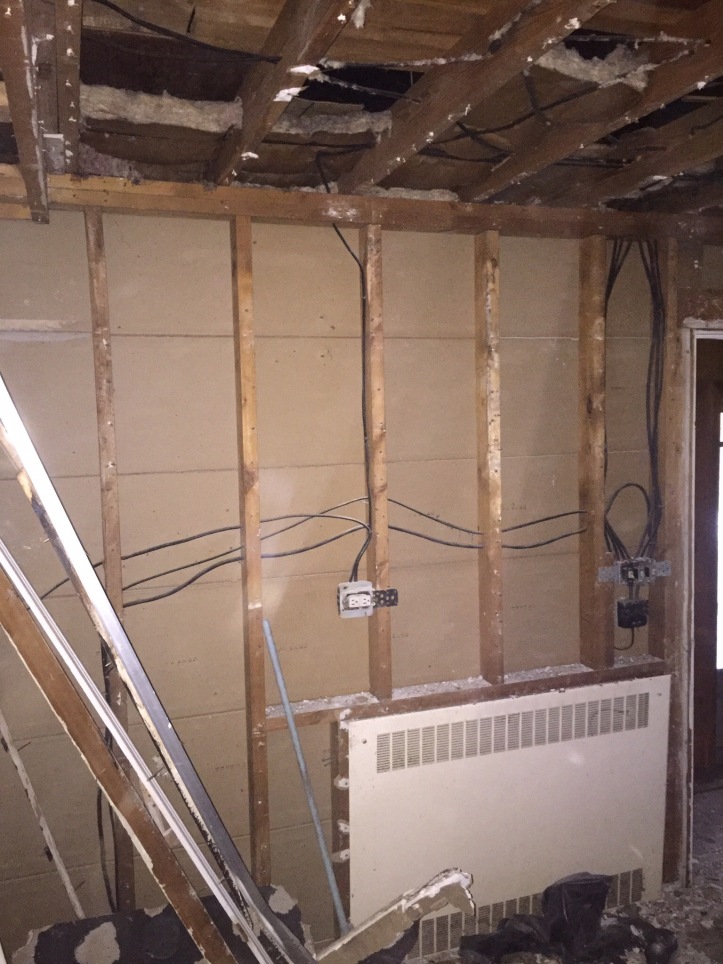 Some of the electricians told us that the whole house basically needed to be rewired. Why?  Because the way these old houses were wired, everything was connected. So there could be an outlet in the kitchen connected to an outlet across the house in one of the bedrooms–taking out the kitchen wiring would mean potentially knocking out the power in the rest of the house. Good to know.

Most of the electricians came in with pretty similar quotes: $2,800-$3,500 just to replace the panel, and then $2,000-$3,000 for the rest of the work. Ouch. I suggested that we get one last quote from the electrician that did work on our house when we first moved in. Mr. Bunches agreed and we were shocked at how low their cost was: only $2,800 for everything! And they were able to book us the following week. Sold!

Now, I know a lot of you are thinking to yourselves, ‘Okay, there’s probably a good reason this company is so cheap and available. C’mon Bunches–this isn’t amateur hour! You should know why too.’ And we agree–we were prepared to be on top of the situation, but we also knew that that the work required a town inspection, so we figured that whatever we missed, the town inspector would catch. And, spoiler alert, so far there haven’t been any major catastrophes.  Minor ones? Uh, yeah.

First of all, to be up to code, the new electrical line coming into the house has to be 13′ off the ground. Our house is a ranch, so that means the electricians had to add a big pole to get to the required height. Every electrician we met with, including the ones we hired, said they would put it on the side of the house by the garage as that would be the least conspicuous spot. So what happened? Well, Mr. Bunches and I were both tied up at work the day that they installed the new panel, meter, and pole, so when we checked out their work that night we found this: 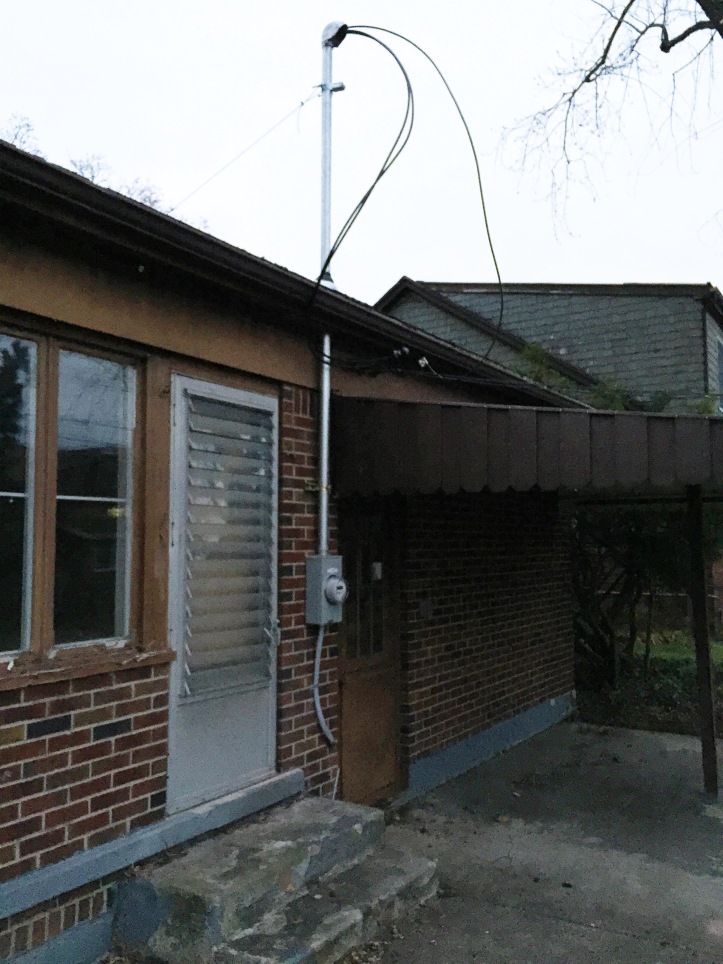 They took the path of least resistance and put the meter on the back of the house, directly between the door to the sunroom and the back door to the garage. Annoyed doesn’t quite begin to describe how we were both feeling.  It’s just not what we had in mind.

At this point, it was too late to move it (they had already drilled a hole in our roof and everything), so we just took it as a learning moment and moved on. The lesson? Always be present at the house when big things are happening.

The next phase was the rewiring of the kitchen. Mr. Bunches and I both spent time with the owner of the company, and his workers, going through everything we wanted done. The owner drew on the studs and placed empty electrical receptacles as markers for where things should go. This gave us some comfort but we still knew it was a lot of work and they might need some hand-holding along the way. Some was an understatement.

The owner ripped out all the old wiring in the kitchen prior to his guys starting the work. He did the same in the bathroom. The electricians then came in and put in all the new wiring in the kitchen and bath, including new recessed lighting in the kitchen. They “finished” the work while we were out of town for a week. And yes “finished” is in quotes for a reason. When we got back to town we had the owner over and he confirmed that, in fact, they were far from finished. Not only was none of the new wiring tied into the new panel, but there wasn’t a single outlet in the whole house that worked! When the owner ripped out all the old stuff in the kitchen and bath, he had basically cut off power to the entire house (because everything was connected). Thank goodness Mr. Bunches tested everything!

So what happened? Well, we basically got the entire house rewired for the original quoted price. We’ve actually only paid them $1,800 so far because they have to finish the work (put on the outlets and switches) after the drywall is done. As of now, we’re happy with the work. The owner made a mistake by tearing out all the old wiring before really understanding how it was all connected, but the electricians who did the work actually did a decent job. And the price can’t be beat.

With the first phase of the electrical work done, the kitchen looked like this: 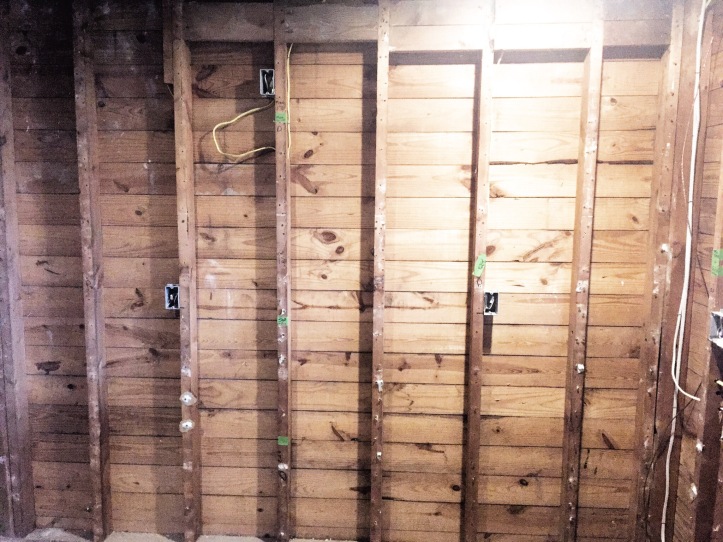 And did you notice the biggest change? The one that prompted the title of this post? We have light!! 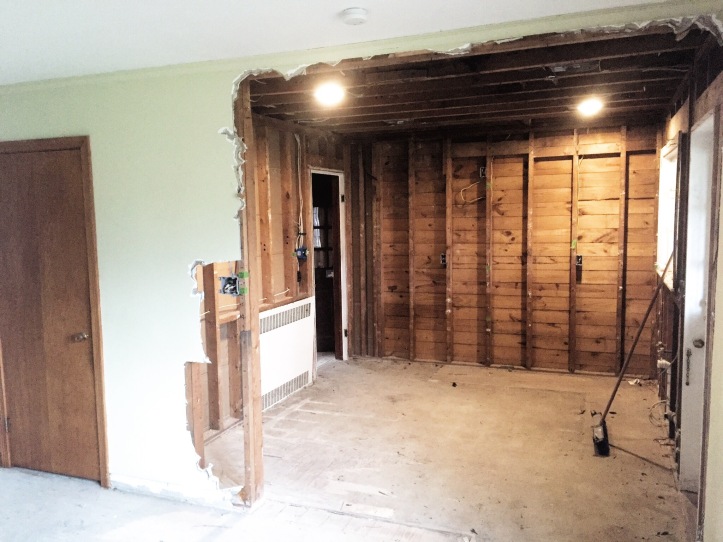 We added four recessed can lights in the ceiling. There really isn’t any natural light in the kitchen since the window and Dutch door both open to the sunroom so we knew we needed more lighting.  In the pictures above only two of the new lights have light bulbs. So it doesn’t do it full justice, but it’s still so nice to finally be able to see in there. And you may have also noticed the new plumbing for the sink:

Our contractor extraordinaire, Steve, took care of that for us. He’s also been super busy of late. Ever since the electricians finished Phase 1, he’s been busy putting in insulation and laying drywall. The space is really starting to look transformed. Update pics coming soon!