Time for a Bigger Chair

Mini B and I traveled to Dallas a couple weekends ago to visit Mr. Squishy.  As usual, she did well traveling although that might be our last solo trip for a while . . . I’m not so sure that my seat neighbors appreciated Mini B’s feet in their lap while I nursed her on the plane.  Sorry strangers.  But besides that, it was a great, albeit far too short, trip and we can’t wait to see Mr. Squishy again sometime soon.  Oh, and as a bonus, we had a longish layover in Boston, so Mini B got some quality time with Grammie.

Now, I haven’t made it through all my pictures yet (I only just got through my pictures from our earlier trip to Dallas four months ago), but I thought it would be good to make a little comparison.  Here’s a shot from our first time meeting Mr. Squishy (this was before he earned his nickname), taken on September 22, 2012:

And now here’s a shot from our recent trip, taken on January 21st, 2013 (almost 4 months exactly after the shot above).  And note–these kiddos are in the same chair (and I tried to pick a shot of them in similar positions):

No one’s been missing any meals, eh?

And we have to thank Mr. Squishy for lending his clothes and toys to Mini B during our trip.  It was nice to not have to pack too much, and Mini B had so much fun testing out all of Mr. Squishy’s goods. 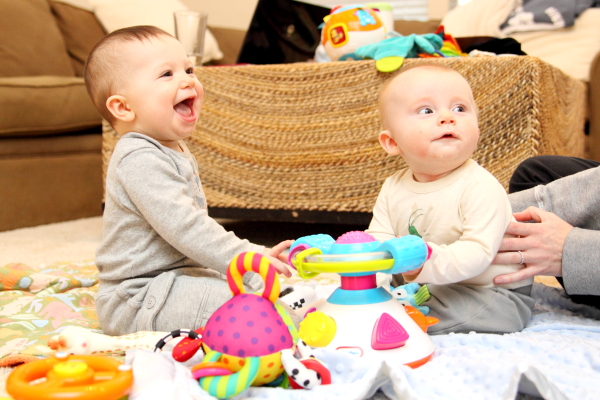 Of course, Mini B would have been remiss if she didn’t share anything of hers . . .

Mini B thought he looked quite dapper.

Although she was a tad confused by the whole situation. 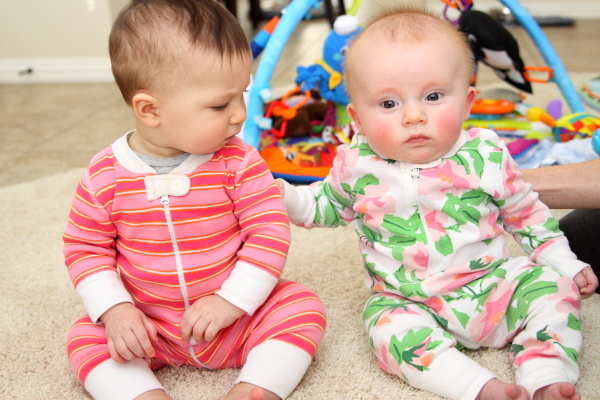 Just a little taste of what Mr. Squishy might have looked like if he had been born a Mrs. Squishy . . .

And hopefully he won’t someday hate his aunt for posting pictures of him in a flowery jumpsuit.

Isn’t it crazy what a difference 4 months makes?