Do You Believe in Miracles?

And here it is–my attempt at keeping a New Year’s Resolution.  Ideally I’ll fall into the 8% of people that actually keep their resolutions, but let’s be realistic, shall we?  Blogging once a week will likely be a stretch, and this post will make 2 in one week, so I’m setting the bar a little high, huh?

Okay–back to the topic at hand.  The day after Christmas we headed to Brockport so that Mr. Bunches could relive his glory days–as a member of Brockport High School’s Hockey Team, but this time playing in an impromptu alumni game.  In preparation for the big day, Mr. B thought it best to prepare Mini B with a viewing of his favorite movie of all time: Miracle.

Speaking as a non-hockey-playing American, this movie is great.  So even if you’ve never played, watched, or even cared about hockey, you can still like Miracle.  I’m not sure what Mini B thought of it, though; Mr. B will tell you she loved it, but truth be told–it only held her attention for a whopping 5 minutes.  However, it may be a new holiday tradition for us–an annual viewing of Miracle before Christmas.  A little unorthodox maybe, but it works for us.

Having seen Miracle, let’s just say that the BHS alumni game was nothing like it.  🙂 It was, however, fun for Mr. Bunches, his cousins, and his friends.  And that’s what really matters, right?  So now I’ll let some pictures tell the rest of the story . . . 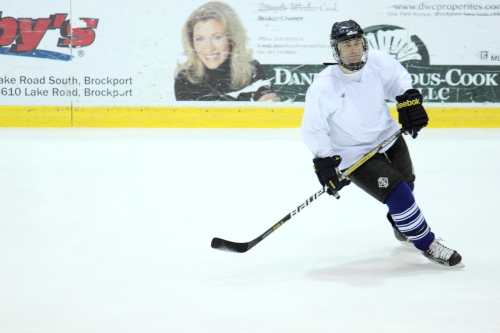 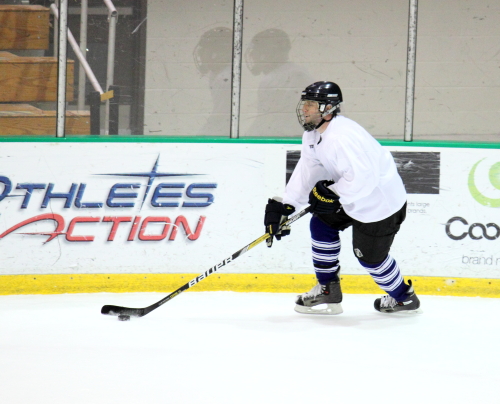 Thrilling, eh?  I’d like to say I could tell you what the score was, but I honestly wasn’t paying attention; and I’m not entirely sure anyone else was either.  But, it was great to see Mr. Bunches out there with some of his old teammates, even if they were a little, er, slower than in their younger days.

And having his cousins there was an extra treat. 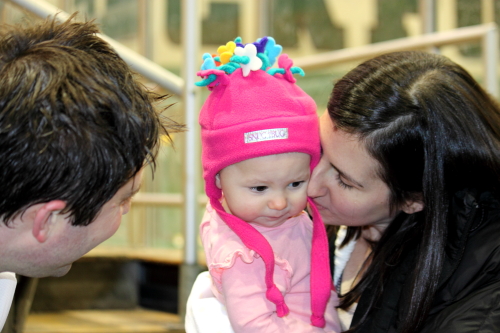 And a nice chance to see some good friends as well . . . 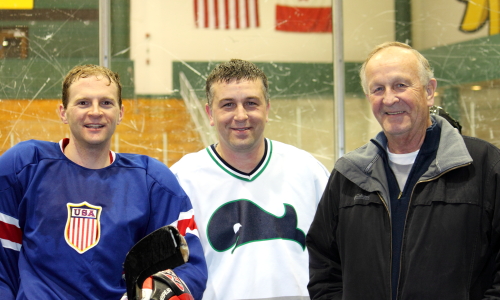 It was the first time Mini B got some up-close and personal time with a hockey player (not counting her dad).  She was absolutely fascinated with her cousin’s jersey . . . 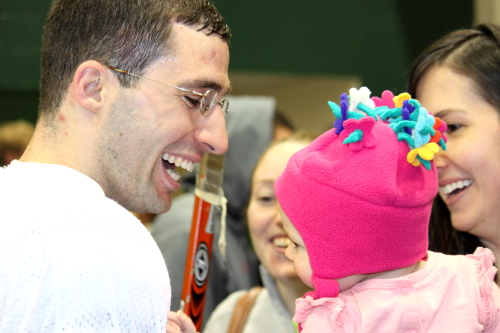 But Jason wasn’t the lucky one that night.  Nope, Chad was the one that Mini B really took a shine to . . .

Oh yes–she has learned to give kisses!!!! 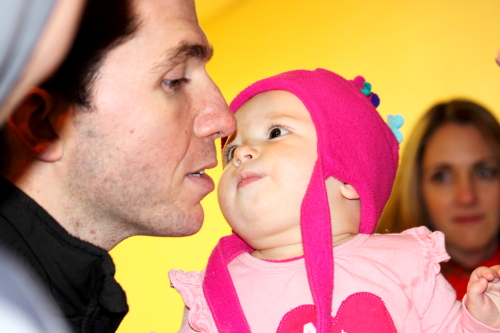 Her kisses are the absolute best.  THE BEST.