I’m a list person . . . to-do lists, shopping lists, pro/con lists, lists of what I would do if I ever got a full night’s sleep again, and last but not least: top ten lists (here’s an example of another top ten list I did about Brockport, NY).  So here’s a top ten list of what has led to our survival over the past four and a half months of parenthood.  And since it takes too much brain power for me to put these in any semblance of order, they’re just random.  Oh, and I should preface this with this: these items worked for us and may not work for others. If there’s one thing I’ve learned throughout the past few months, it’s that each kid is totally unique. With that said, here we go: 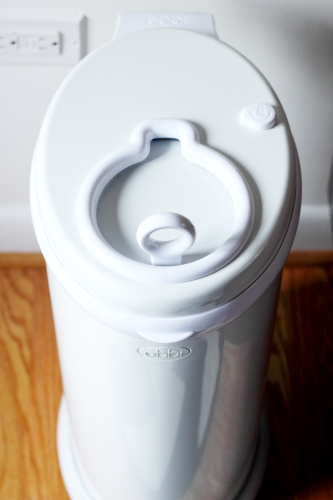 I love the Ubbi Diaper Pail.  So much so that I bought two–one for disposable diapers and dirty wipes; and the other for cloth diapers.  It contains all that yummy dirty diaper smell so that Mini B’s room doesn’t smell like a toilet.  Thank goodness.  Because really–who wants to live in a toilet?  Not Mini B.

This music box actually came as a piece of the Baby Einstein Neptune Ocean Adventure Mat . . . 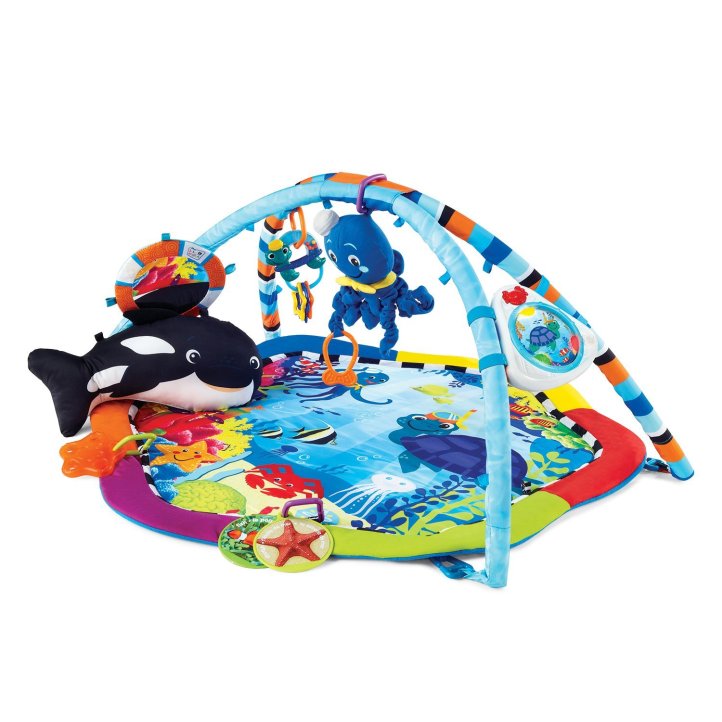 and it has been invaluable in getting Mini B to sleep.  Whether attached to the side of her crib, in the backseat of the car on road trips, or in hotel rooms on vacation, this is Mini B’s equivalent to Pavlov’s dogs’ bell.  While not entirely foolproof, it generally induces sleepiness.  So thank you Mini Crab and Mini Turtle.  We owe you (although we don’t understand Mini Turtle why you have a snorkel and mask–I mean really Baby Einstein, what lesson is that teaching our children?).

How is the Kindle a top ten baby item?  Allow me to explain in simple chapter and verse: Mini B sleeps in a pitch black room (I’m not kidding–I bought black-out roller shades and black curtains; her room might as well be 50 feet below ground when the shades and curtains are drawn); until recently, nursing and/or rocking Mini B was one of the only ways to get her to sleep; nursing a baby in a pitch black room is beyond boring–I cannot stress this enough–we’re talking serious mind-numbing boredom here; Mini B nurses A LOT (again, this is an understatement, but trust me–she’s no stranger to eating); having a Kindle Fire (the Amazon light-up reader for those of you that don’t know) has been literally a life-saver.  For me, and for Mini B.

I only discovered how wonderful the Kindle was over the past two months, and in that time I’ve read over a dozen books–the entire Hunger Games series, the last two Harry Potter books, the entire Anne of Green Gables series, and multiple Jane Austen novels.  And all of that reading was done in a pitch black room with Mini B attached to me.  Thank you, thank you Kindle for saving me from staring at blackness for hours on end.

This one is a bit random, but these pads have been awesome for all those “accidents” that happen mid-diaper-change. 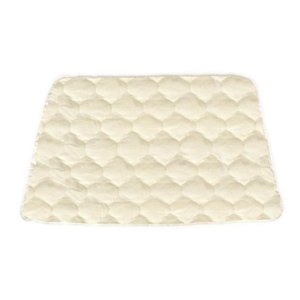 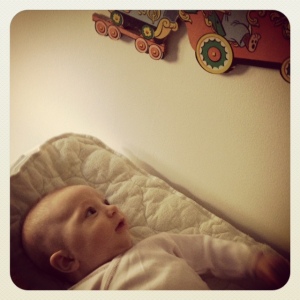 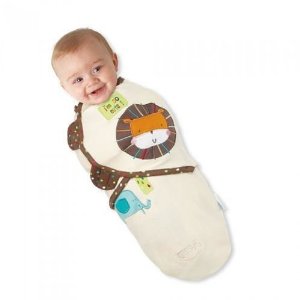 These were literally lifesavers.  Literally.  The Summer Infant Swaddleme blankets are basically a cheater’s swaddling blanket–velcro tabs take all the challenge out of it.  They also give some needed resistance for those babies, ahem Mini B ahem, who fought the swaddle tooth and nail.

Mini B was in these blankets from birth up until a few weeks ago.  This shot was taken a couple months back.

While she may look all peaceful, don’t let her fool you.  She was always ready for a fight . . .

And her victim?  Usually the swaddle blanket.  Sometimes Mom and Dad.

I loved these so much that I even snuck one on my nephew (and I’m happy to report that he’s been in them ever since and his sleeping has been much improved) . . . 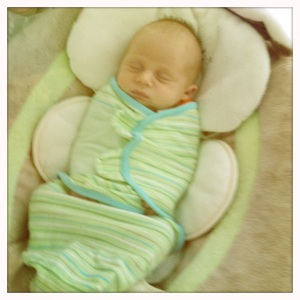 Not that I don’ t love Big Bird (the chair we converted into a rocker here), but I have to say that our nursery rocking chair has been my go-to . . . for nursing, for rocking Mini B, for reading stories, and yes–even for sleeping sometimes (although that was only during a 30-hour night and day spent trying-to-wean-Mini-B-from-the-pink-palace, aka: the night from hell.  Oh, and the weaning wasn’t even successful so it truly was THE night from hell).

#4 The Pink Palace, aka Nap Nanny

As any new parent can attest, sleep becomes an all-consuming desire.  So much so that you’ll find yourself in the aisles of Babies-R-Us buying every possible sleep contraption they make (I’m not joking–during week 4 I sent Mr. B and Aunt Doodles to the store and they returned with all 4 of the newborn sleeping options from Babies-R-Us; since I still wasn’t up for leaving the house, they figured they’d bring the store to me).  What ended up working?  The Pink Palace!

It’s actually the Nap Nanny, but we refer to it sometimes as the life saver.  So much so that we even smashed it into a suitcase and took it to Philly.  Even though she’s no longer sleeping in the Pink Palace, it will forever hold a dear, dear place in our hearts.  Thank you Pink Palace.  Thank you.

UPDATE: The Nap Nanny has been recalled so it can’t be purchased anymore.

Now, even though Mini B didn’t play with toys for her first couple months, she still was pretty mesmerized by this one.  And since becoming more interactive, this is definitely her favorite . . . I mean, just look at all the phone pics it makes an appearance in: 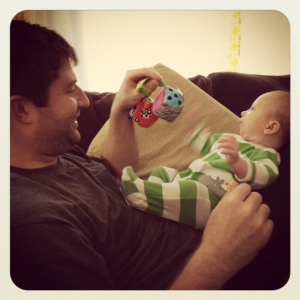 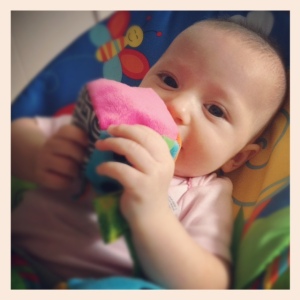 Right up there with her fuzzy dice is this little lovie.  She literally flips out when she sees it and absolutely loves smashing as much of it into her mouth as possible.

BTW–don’t you love how Mini B looks like she was born in the 70s in that pic?  It’s from a recent trip we took with friends to the middle-of-nowhere Pennsylvania, during which we stayed in a 100+ year-old farmhouse.  Good times. 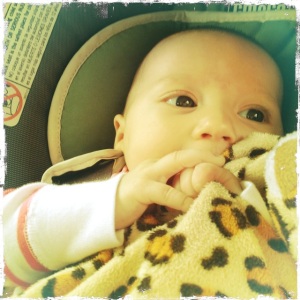 Kind of anti-climactic, right?  But at least I’m honest.  Mini B had one raging diaper rash early on and Desitin literally saved us.  Boring?  Yes.  Exciting?  No.  Practical?  You betcha’.  And no–I don’t have any pictures of Mini B with Desitin.  That would just be weird.  But, since we can’t end on such a blah note, here’s one last phone pic of Mini B (oh, and for those that haven’t figured it out yet–I finally joined the rest of the world and got an iPhone.  I am obsessed now with taking pictures and with Instagram, Hipstamatic, and Diptic.  It’s the little things in life, right?) 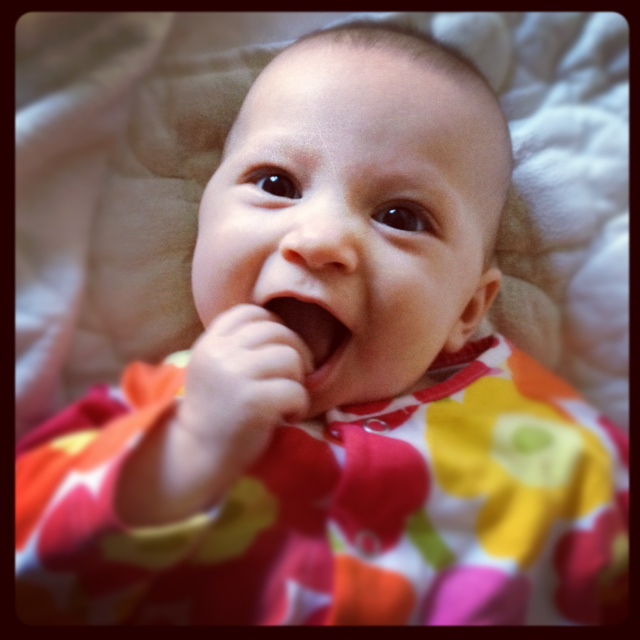 And three points to anyone who can guess where that pic was taken . . .