Yikes–writing that post title has made me realize just how long this project has really lasted.  So much for everything being said and done in 3 weeks, right?  Well, at least the contractors were done after 3 weeks (see more on what they did here).

And then we did hint at having our new floors installed once the first group of contractors was done (the floors were finished in only one day, and then our home was contractor-free finally).

I’m not going to go through all the steps here, since there are plenty of great tutorials out there in blog land (one of the best here from YHL), but I’ll make a few points as we go since our process differed slightly.

First up, like I mentioned before, we removed the 1960s trim from the cabinet doors.  I just used a hammer and a putty knife to carefully take it all off.  Oh, and we also removed all the knobs.

We then filled any holes with wood putty; I used Elmer’s Wood Filler. 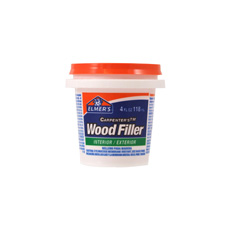 Once everything was sanded, Mr. Bunches scrubbed it all with a deglosser (we used Klean Strip Deglosser from Lowe’s–no real reason we chose this one except that it was the only one Lowe’s sold).

Once that had all dried, it was time to get our prime on.  And on.  And on some more.  We opted for Zinsser Bullseye 123 Primer since it had worked so well on my sister’s kitchen.

And while we had hoped to only have to do one coat of primer, turns out our cabinet doors had something else in mind.  The wood grain kept bleeding through, particularly in the spots where we had removed the trim.  So on went coats #2 and #3, much to Mr. Bunches’ frustration.  And guess what?!  That still didn’t work.  So I finally knew we had to switch to oil-based primer (given my current knocked-up status, I was hoping to avoid all those crazy oil-based noxious fumes which was why we had waited so long to try this option; but don’t worry–all the oil-based priming was done by Mr. Bunches in the garage while I was safely inside.  Thanks Mr. B!).  So we used some leftover Kilz Original that I had on hand, and with one coat of that, all was covered.

Up next was the painting.  I took care of the inside cabinets while Mr. Bunches took domain over the doors and drawer fronts.  After two coats of Sherwin Williams Pro Classic paint (color matched to Benjamin Moore’s Decorator’s White), we were left with this:

Major improvement, right?  Oh, and I forgot to mention that we (meaning I) decided that we also needed to paint all the window and door trim.  Needless to say, Mr. Bunches LOVED that idea.

Isn’t it already such an improvement?

Since most of the painting took place over a couple weekends and weeknights, (and we had a little detour to the east coast during the process) it took a while before we were finally ready to put it all back together.  Plus, I wanted to make sure that everything had a chance to cure up well, so once we were done painting we waited three days before getting the doors and drawers back on.

And that’s where I’m going to leave things today, but I promise that before the end of the week I’ll share some actual reveal photos of the kitchen all put together.  Hooray!