Fit for a King

Even though life at the Bunches’ household has been a bit hectic lately (we’ve both been off traveling for work), that hasn’t completely stopped us from making some updates.  And, of course, there’s no better reason to do some updating than when you’ve got company coming.  So when I found out that some of our pals were going to ring in the New Year with us (more on that here), well, I figured we better get into action . . . 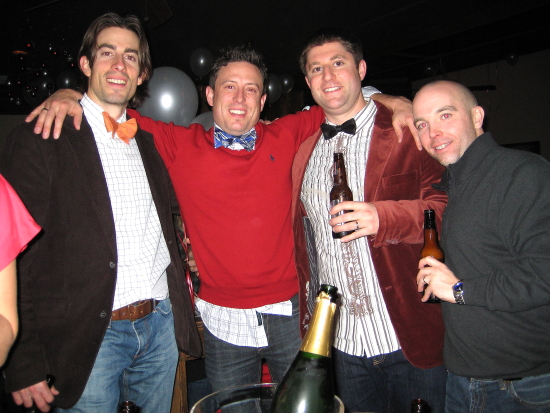 Yes, I know that this post is not exactly timely considering that New Year’s was almost a month ago.  But you know what?  We’ve had some happenings here of late so just excuse us, will ya’?  Thank you kindly.

Don’t they just look like royalty?  Kings of men, right?  And what better way to welcome Kings than with a new throne, right?  You had to have seen this coming . . .

Pretty snazzy, eh?  It might look a little familiar from when we installed its twin, and said goodbye to our Boy Blue . . .

In this case, though, we were saying goodbye to his girlfriend, Mrs. Peaches . . . 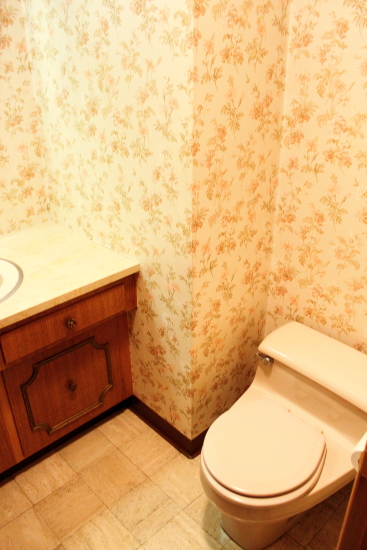 In case you don’t remember, Mrs. Peaches was the low-rider in our oh-so-dated half bath.  And besides being low, squat, and one solid piece of porcelain, she also had the added bonus of not quite working.  Awesome.  Nothing like having a non-working toilet in the guest bath, right?  That just meant that all of our guests ended up using the master bath (because apparently they were too lazy to walk upstairs to the full guest bath, ahem-Deenie-ahem).  So, just a few hours before Fabio et al arrived a few weeks ago, Mr. B and I set to work changing out the toilet.

I’ll spare you all the toilet-swapping details; it was basically the same process noted here, with one exception: I figured that while the old toilet was out, this would be a perfect time to remove the wallpaper behind the toilet (we could get to the rest of it later).  Great idea, right?  Wrong.

As some of you may know, removing wallpaper is the W-O-R-S-T.  Yeah, even armed with a scorer, scraper, and DIF, wallpaper is still a pain in the butt.

Not only is it hard to remove, but you never know what’s underneath it.  And in this case, we struck wallpaper gold–what I initially thought was moldy drywall when I first got a peek at it, was actually yet another HIDEOUS wallpaper. 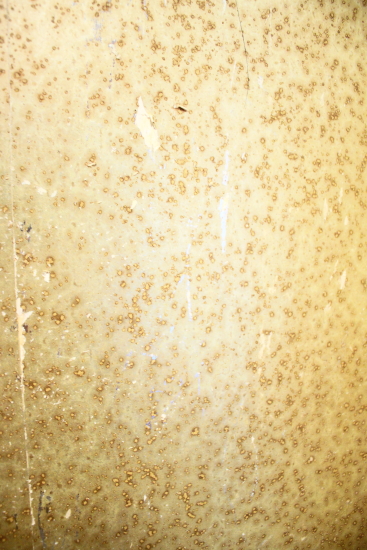 Seriously?  Who thought this was a good idea?  And what you can’t really tell from the pictures is that it’s actually shiny–yep, it’s a metallic hideous wallpaper.

See how there’s a certain sheen to it?  Oh, and while the DIF worked on the floral paper, it had absolutely no effect on this super-duper-stuck-to-the-wall-for-life paper.

I ended up even getting an estimate from a contractor for removing the rest of the wallpaper.  The contractor said that he’d recommend removing the floral paper, but leaving behind the metallic paper because it was stuck on so hard.  He even said you could paint over the metallic paper (first with an oil-based primer after patching any rough spots, and then with a good quality latex paint).  He offered to do it for $500, but for that price I think we’ll tackle it on our own.  Oh, and it was good to hear that the pros rely on DIF too–he uses the same technique of using a scorer and scraper with DIF-soaked walls; when I asked about a steamer, he said that was always the option of last resort since it often damaged the drywall underneath. 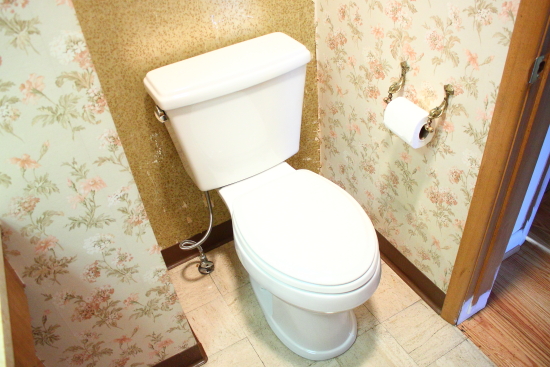 So there it is–a new toilet installed, but a new problem uncovered.  Ugh.  BTW–how do you like that fancy goldfish toilet paper holder?  Kind of goes with the mold-like wallpaper, eh?  Anyone else feel our wallpaper pain?  Any suggestions?