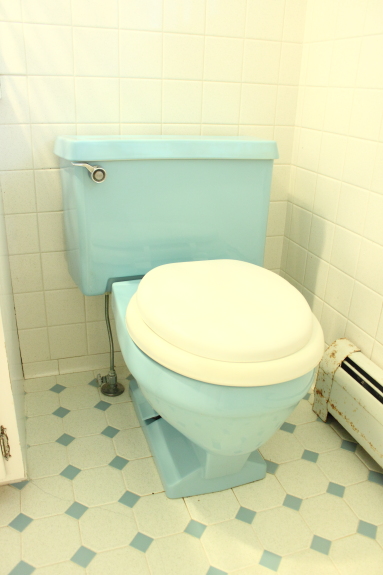 Yep, that’s right.  The Mr. and I tackled the project that’s been intimidating us for quite some time now–the dreaded toilet change!  I’m sure you remember our Boy Blue from this post when we removed the faux potty privacy screen, right?  I mean–how could you forget him?  In all his blue glory with his white squishy toilet seat (can someone please outlaw the squishy toilet seats already?!  Y-U-C-K!).

So, after about 4 weeks of having a new toilet just waiting in the garage, we finally got up the nerve to take the plunge (get it?  plunge? nothing like some toilet puns to start your week off right, huh?).  We did a little research, took a trip to Home Depot to get the proper tools (a wrench and a new water line hook-up), and then got started.  In case you’re wondering–the research came down to YHL’s tutorial and a YouTube video from Home Depot; if you’re looking for a play-by-play, I suggest you check out those two spots for all the details.  I’m just going to go over some highlights here, but by no means is this a full tutorial–why reinvent the wheel, right?

Once the water was basically out of the bowl and tank, we took off the tank.  Oh, and we had already laid moving blankets on the floor–we knew we were just going to wrap up the toilet to get it to the garage (there was basically no way we were taking a chance of anything dripping onto our new hardwood floors on our way out the door, so we wrapped that puppy up tight!).

Once the tank was off, we were left with the bowl. 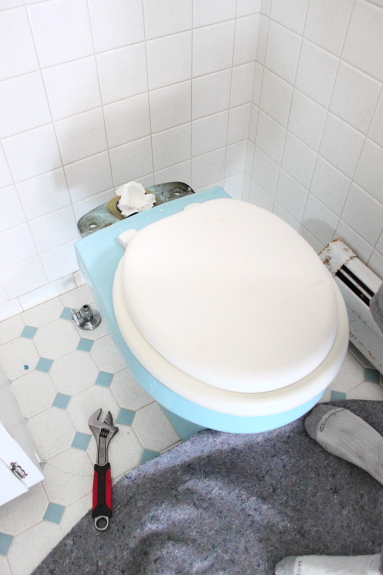 We also had to remove the water line.  It’s already done in the picture above, but here’s another shot:

All we had to do next was unscrew the bolts holding the toilet to the floor, rock it a little, and then lift.  This step was all done by Mr. Bunches.  He’s the one with the brute strength afterall.

So do you want to see what the floor looked like?  I couldn’t find any pictures of what to expect online, and I think that’s what had me the most freaked out about the whole replacing-a-toilet thing.  That and the potential smell.  Both were total unknowns and had left us crippled for four weeks.  So–was it really as bad as I had imagined?  No.  In short–it just wasn’t.  It was a little gross, and I’m only showing this because this was not a toilet that either the Mr. or I ever used since we bought the house, so nothing you see here came from us.  With that caveat, here’s what the floor looked like after the Mr. pulled up our Boy Blue:

That probably looks way grosser than it was.  All that dark brown/black stuff isn’t what you think it is–it’s just the wax ring mixed with some rust from the toilet flange.  Oh, and as for the smell?  Well, we didn’t really smell anything.  Of course, that didn’t mean that we left that hole unplugged.  Oh heck no.  We quickly plugged it up with an old towel–we weren’t going to wait for the sewer gases to seep in.

But, in the end, it just wasn’t as terrible as I had feared.  It wasn’t really that terrible at all.  See–not that bad, right?

Again–the Mr. and I never used this toilet.  Just sayin’.

Once our ol’ Boy Blue was outta’ there, it was time to put the new toilet in.  And here is where I’ll skip any further details and just say that you should see the links noted above.  Oh, but I will say that I now know it takes exactly 7 minutes and 38 seconds to get from our house to Home Depot.  Why do I know that?  Oh, only because I had to make 4 trips during this process.  Yes–FOUR!  I was not happy.  But two wax rings and two water lines later, we were left with this:

Isn’t she purty?!  We went with the Jacuzzi Maxima toilet in white from Lowe’s.  I loved the look of the Kohler toilets, but the Lowe’s guy talked us out of them–apparently Kohler’s toilets have gone down the crapper (that’s two toilet puns and counting) lately, and only offer a one-year warranty.  Jacuzzi toilets come with a five-year or ten-year warranty (I don’t remember which–oops).  Plus, this toilet was cheaper than most of the Kohler ones–it only cost $188 versus ~$250-$300.  And I liked the traditional lines of it . . . 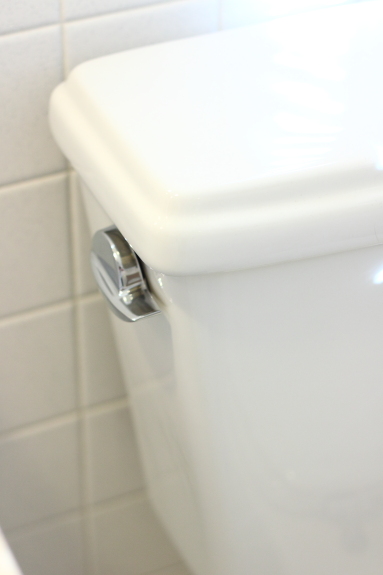 Which I matched with an upgraded toilet seat from American Standard.  Remember I mentioned getting a toilet seat without plastic anchors back in my half-bath mood board?

Well, I’m so glad I did.  It just looks much nicer.  More finished. 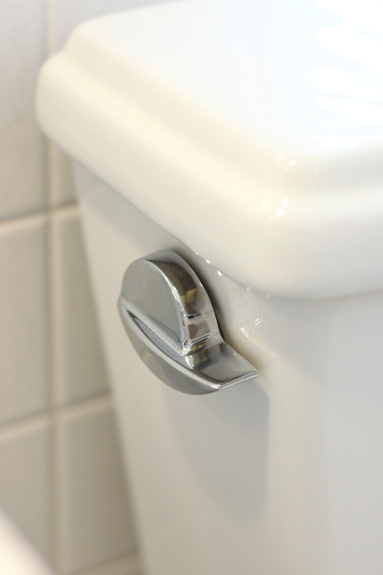 So even though the toilet came with a seat, I’m glad we upgraded.   It was worth the extra ~$30.

Mr. Bunches and I were pretty pleased with ourselves–this was definitely our first big homeowner DIY challenge and I think we managed it admirably.  Of course, that means there’s no excuse for not tackling replacing the other toilets in the house . . .

So are we the only ones crazy enough to replace a 50+ year-old toilet?  Have we totally grossed you out?  Did we ruin your lunch?  Sorry. 😦