Aloha kakahiaka! (Translation: Good morning!)  I hope everyone had as exciting of a weekend as Mr. B and I, but I seriously doubt you did.  Unless, that is, you magically transported to the ninth Hawaiian island, aka a little place I like to call Brockport.  But Saturday night, it should’ve been called Holoholo (that translates to to walk or travel for fun and really it was the only somewhat-related Hawaiian word I could find in less than two minutes via Google; if you can come up with a better word, I’m all ears) . . . you see, Mr. B and I were invited to a LUAU party by our friends, Mr. and Mrs. Holoholo (names have been changed to protect the innocent): 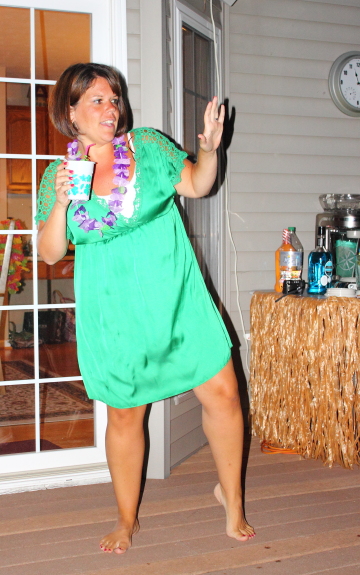 That’s Mrs. Holoholo doing her welcome dance for us.  Somehow Mr. Holoholo managed to dodge my camera all night, so instead I’ll just include a picture of Mr. Bunches in his full Luau regalia (disclosure: he picked this outfit out all by himself, so I’m taking no credit):

Mr. and Mrs. Holoholo put on quite the spread.  The LUAU was an uber festive occasion.  Upon arriving, we were immediately leid . . .

And offered our choice of quite a few beverages (Cotton Candy juice, Whipped Cream juice, Mixed Jim Boeheims, assorted juices and sodas and the list goes on and on in total PG fashion) . . . 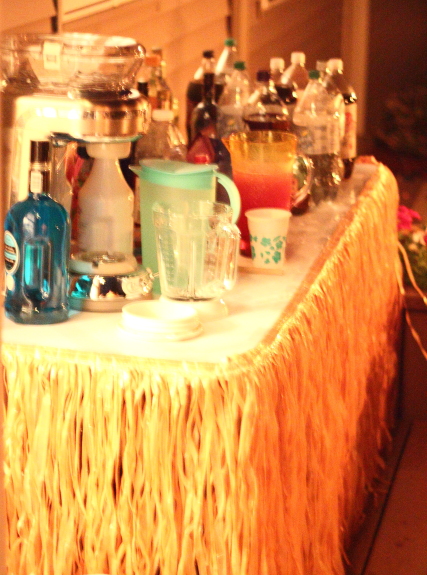 Too early in the morning for that shot?  Sorry.  I was just excited (and sort of dancing–yeah, sometimes I dance a little like Elaine.  Deal.)  Anyways, the decor was quite nice . . .

And there was even some mood lighting . . .

I wish I had some pictures of the flamingo drink straws, but I think I may have been too focused on the drinks themselves.  Oops.

The party was an excellent time.  There was entertainment, including dancing by Mrs. Holoholo and her partner-in-crime, Mrs. Rockstar (you’ll understand the name later when you see her husband).  Here’s a little fishing demonstration . . .

And a Zumba presentation: 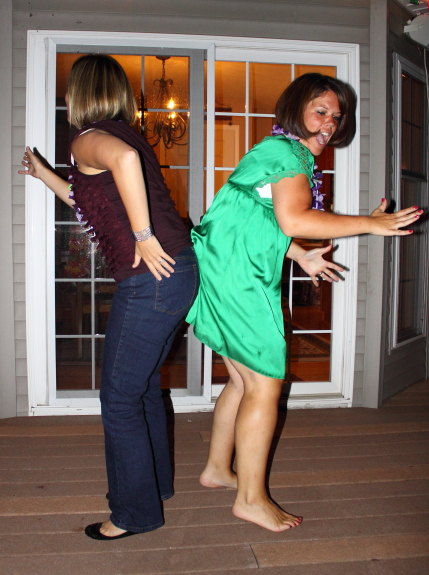 Now that’s a party!  Of course, Deenie had to get a little stretch in before he showed the ladies how it’s really done on the dance floor . . .

It was wild.  W-I-L-D.  But, it was really just the opening act for what was to come next . . . but first, intermission (I know–is the suspense killing you already?  Sorry, but I’ve got to get all these pics in somehow).

But there was also some normal chillaxing too. 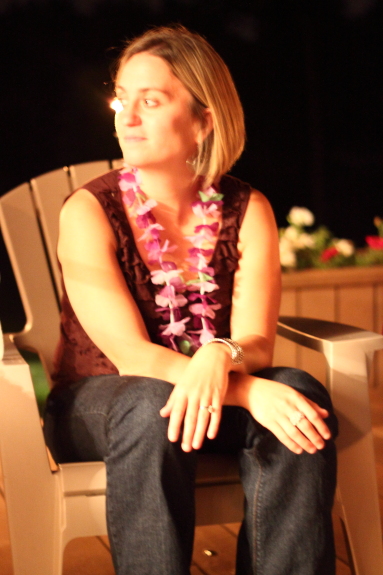 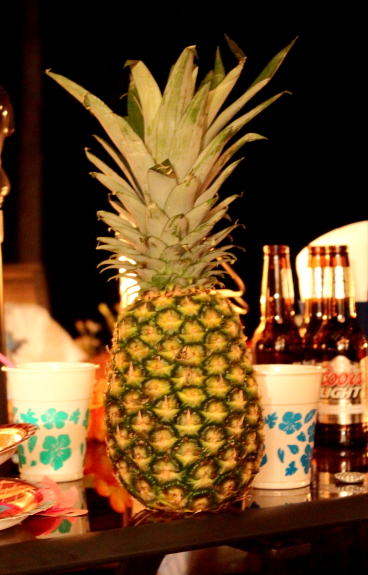 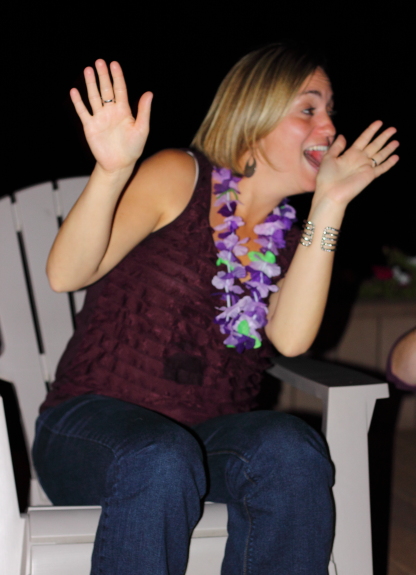 Can I get some hands in the air?  Maybe waving from here to there?

Let’s welcome to the stage . . . Mr. Rockstar!  Here the crowd was supposed to cheer, but somehow it was eerily silent.  Wonder why?  First, of course, Mr. Rockstar needed to warm up and tune his guitar . . .

Luckily, it had recently been tuned, so he was all set.  Let the show begin!

If tomorrow all the things were gone,

I’d worked for all my life.

And I had to start again,

with just my children and my wife.

to be livin here today.

‘ Cause the flag still stands for freedom,

and they can’t take that away.

And I’m proud to be an American,

where at least I know I’m free. 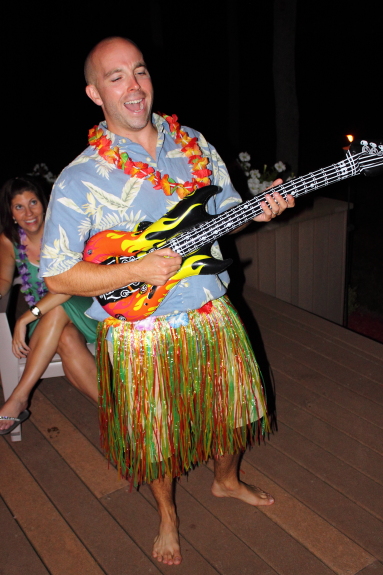 And I wont forget the men who died,

who gave that right to me.

And I gladly stand up,

next to you and defend her still today.

‘ Cause there ain’t no doubt I love this land,

Can I get a round of applause please?!  Fantastic.  Truly a performer through and through.  I’m pretty sure a performance like that requires that the guitar then be retired.  Well played my friend.  Well played.  Rest now.

But the entertainment didn’t stop there!  Nope–then it was time for the laser light show!  That’s right–LASERS!  Performed by Deenie himself all the way from our Nation’s capital . . . 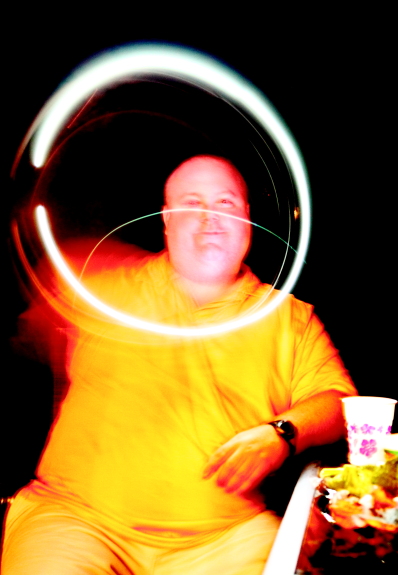 Yeah, so the show mostly involved circles.  Of course, that is, until Mrs. Rockstar got into the act . . .

Then it was time for the interpretive dance portion of the show.  This time, again, led by Deenie himself.  So go on–interpret. 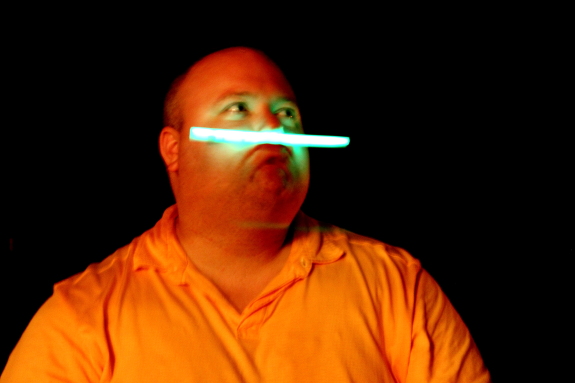 So what did you get out of that?  I got Magnum PI, an accountant, and a Jedi knight.  You?

Alright, so that pretty much wraps up the best LUAU party ever.  And here’s Mrs. Holoholo with her goodbye dance for you (yes, I agree, it’s pretty similar to the welcome dance we saw earlier, but that’s pretty Hawaiian–you know, since Aloha means hello, goodbye, and everything in between): 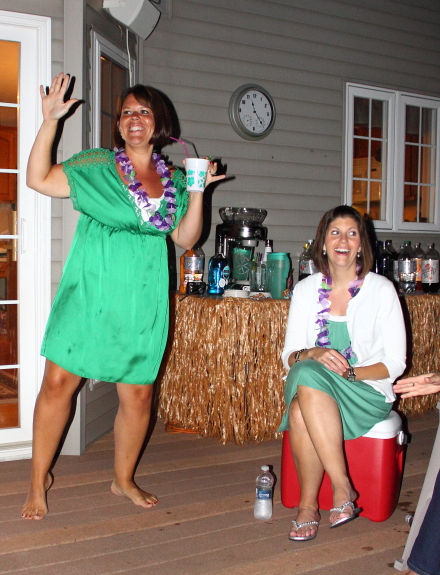 So thanks again to Mr. and Mrs. Holoholo (who not only throw a mean party, but are also two of Bunches of Joy’s biggest supporters–thanks you two!  If you want to be cool like them, then you should subscribe like them.  I’m pretty sure they’ve learned everything they know since subscribing . . . the previous 20+ years of their lives were just kind of a lost cause.  Don’t let that happen to you.  Subscribe now.  Ha.)