When you find a weeping wall in nature, that’s a good thing (we found one here and it was awesome).  But when you find one in your house?  Not so much.  Some of you might remember that we mentioned a problem with our garage wall that was discovered during the inspection (discussed here and here).  Here’s a lovely shot of the wall:

And remember that little diagram I drew up explaining the issue?  You don’t?  Okay, here it is again: 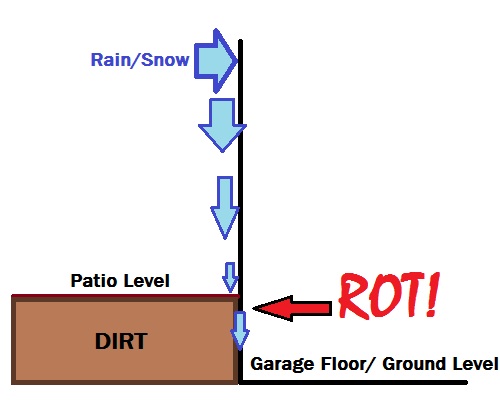 Well, now that the patio has been dug out to a lower level (here’s the latest shot of how it’s looking) . . .

. . . hopefully the underlying cause of that rot has been solved.  But, our contractor still had to fix the ailing wall.  And fix it he did!  These pictures are actually kind of old news now since the wall was done only three days after we closed on our house, but I thought I’d share them anyways.

First up, Steve had to tear down all the drywall and check out the extent of the damage.

The studs were actually in better shape than expected, with only the ones to the far right (and in the closet way on the right) having any damage. 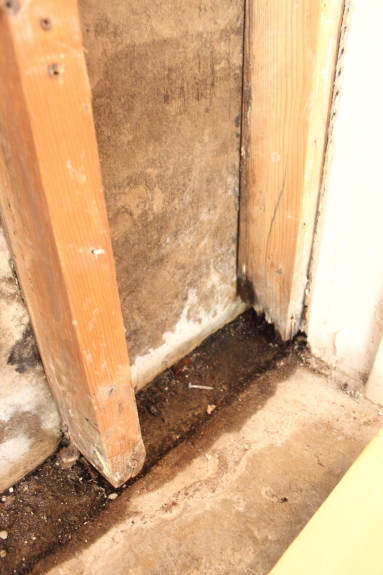 Lucky for us there was a closet since it was that post (the white wall-looking piece in the right of the picture above) that was basically supporting the bulk of the second story.  Oh, and see how damp the ground is?  It hadn’t even rained recently and it was still all wet.  Ick.

Yeah, so the bottoms of the studs were rotted out, and the footer (the stud that goes along the bottom) was completely rotted.  So it was a good thing we took on this project.  And as if this wasn’t proof enough, halfway through repairing the wall there was a major thunderstorm with torrential rains.  Those rains turned out to be a little blessing in disguise.  (Now that we’ve bought a holy house, there seem to be a lot of little blessings coming our way–guess all that sunshine pouring out of the Mr.’s butt is just keeping on.)  Why?  Well, cuz the rain showed us this: 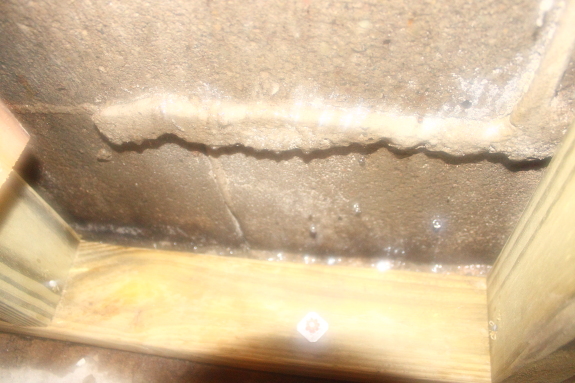 Can’t tell what that is?  Sorry–it was a thunderstorm after all and I was in the back of the garage, so the lighting stunk.  Those are water droplets pouring through the concrete wall and a little stream flowing behind the newly laid footer (made out of pressure-treated lumber, so the water won’t affect it).  Isn’t that crazy?!?!  That’s what we call proof beyond any doubt that the wall had water issues.  It felt good to have a little reassurance that we were doing the right thing and not just jumping the gun.

Anyways, Steve sistered new studs to all the old studs and laid down a new footer.  He also chopped off the bottoms of the old studs so that in case there is ever a water issue again on the garage floor (which there shouldn’t be since we’re fixing the patio, but just in case), the water won’t weep up the old studs and cause them to continue to rot out. 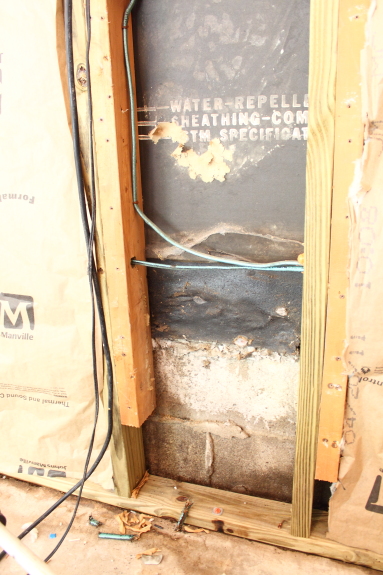 See how the old stud bottoms have been chopped off?  And new studs attached to their sides (that’s called sistering apparently)?  And a new footer?  Oh, and also all new R15 insulation.  Not too shabby, eh?

Steve also had the good idea of covering the back wall with plywood instead of drywall.  It may look unfinished, but it allows us the flexibility of hanging items on the garage wall in any location we want (instead of trying to find studs).  Pretty smart, huh?

He also added two new outlets for us, so now we have three outlets on that wall!  That will be perfect for when I’m out there widdling.  You know, like maybe one of these for our now-empty backyard . . .

You know, from a solid piece of wood.  In my spare time.  Widdling.  Or “carpentering” as Gaylord says.

Anyways, here’s the final wall all sealed up:

Oh–and yeah, those of you who are observant probably noticed the huge pile of carpet.  This pic was taken just this past weekend when we ripped out all the nasty carpet to expose our beautiful hardwood floors.)  Looks good, huh?  Steve even trimmed it out with some quarter-round along the edges to give it a finished look. 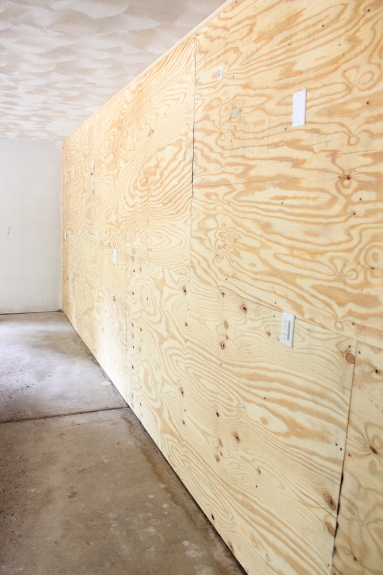 So there you have it–weeping wall fixed, and super-functional garage wall added.  Progress, progress, progress.  Love it!  Now if only our patio can get finished by Friday . . . fingers crossed!