Yep–we finally narrowed down the 12,834 paver possibilities (as discussed here yesterday) to just one.  Can you believe it?  I’m a little in shock myself–making decisions has never quite been my forte, but luckily I had the Mr. to talk me through it.  So how did we decide?  Well, from yesterday you know that we decided on large pavers and even a little wall for added seating and to allow for some visual interest in the patio.  So that meant we had to pick out the pavers and the retaining wall bricks.  Luckily, Weckesser Brick let us take three samples of each so that we could see how they looked in the actual space.  Particularly so I could see how they worked with the existing brick walls (let’s be serious–the Mr. definitely had no opinion when it came to which color I chose; and I kind of love his strictly masculine stance on stuff like that). 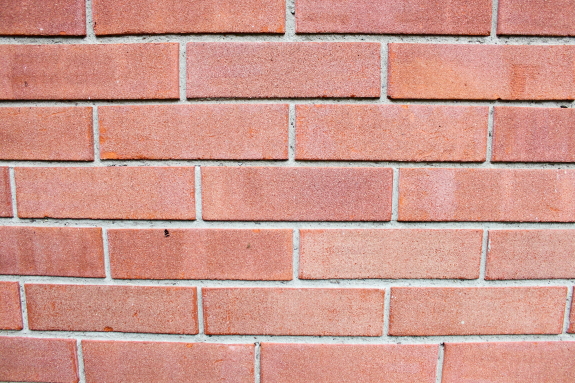 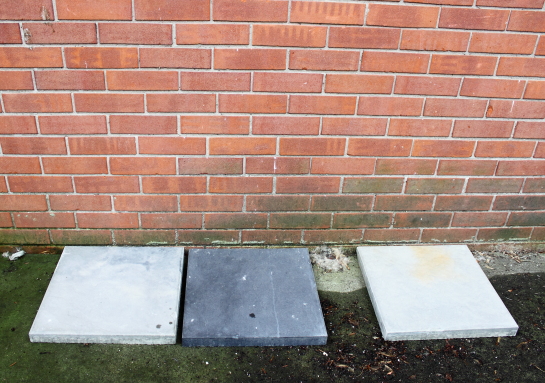 Those are the 16″x16″ tiles (the smallest of the three sizes).  And sorry that the pictures don’t really capture the tiles that well.  Here they are somewhat more close-up:

Basically, the Sorrento was a light grey with some mottled darker gray bits; Shale Black was, well, just what it’s name implies; and then Caramel Ferrous was a grey with mottled caramel blobs on it.  So what did I decide?!  Please–you think I’m going to tell you yet?  You think just laying them down next to the brick was going to make my decision for me?!  Heck no!

Although, to be fair, I did rule out at least one–the Caramel Ferrous paver–I just wasn’t digging the blobs of caramel.  But, to decide between the other two, I brought in the three wall samples to further complicate my decision . . . 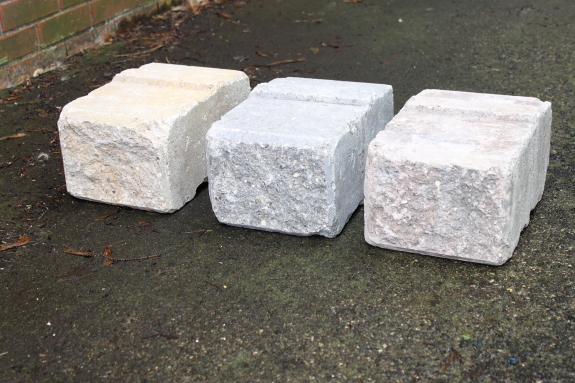 Those are the Hanson Antique Kassel Wall pieces in Sandstone Blend, Granite Blend, and Walnut Blend.  I know–my photography skills are a bit lacking, so it’s hard to tell the difference, so let me sum up: Sandstone is sort of tan slash brown slash gray; Granite is gray; and Walnut is Gray with some pink and purple undertones.  Anyways, I then tried some combinations to see what I liked by laying a wall piece next to a paver, all of which next to the (albeit in-desperate-need-of-a-visit-from-Erin-for-a-good-power-wash) brick wall. 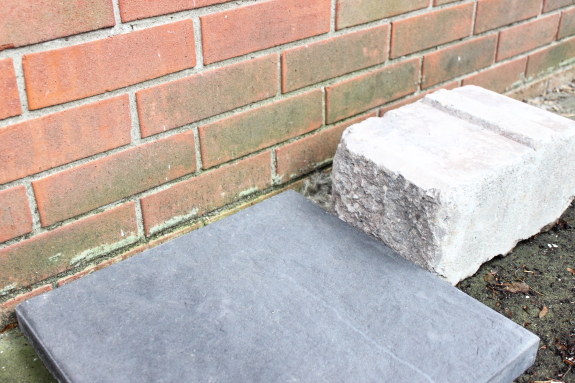 My first combo was the Shale Black and Walnut Blend:

I liked it, but I didn’t know that I was digging the purplish undertones of the Walnut Blend wall piece.  Up next?  The Shale Black and Granite Blend . . .

Okay, so I already know what a lot of you are thinking: Mrs. Bunches, you’re amazing and wonderful and beautiful and fantastic, BUT I really don’t see one gosh-darn difference between those two pictures!!!  First of all–thank you for all those compliments!  (I’m blushing.)  Second of all–there was a difference, albeit a subtle one.  The Mr. was kind of in the same boat that you are right about now–basically wanting me to get on with the show and JUST PICK ONE ALREADY!  Don’t worry–I’m getting there . . .

Up next?  The Sorrento with the Walnut Blend . . .

Again, not bad.  But I just wasn’t feeling the lighter Sorrento pavers.  Maybe because I knew that they would have random dark gray blobs happening on them and that wasn’t the look I was going for?  I knew that I wanted something really clean and uniform looking, and that’s why the Shale Black was so appealing to me.  And since I didn’t like the purplish undertones of the Walnut Blend, I knew that Granite Blend was the answer.  That way the back patio would basically be varying shades of gray (my current favorite color) and would tie in nicely with the grout in the brick of the house without being matchy-matchy (which was sort of how the Sorrento tiles seemed).  So here you have it–the FINAL combo: 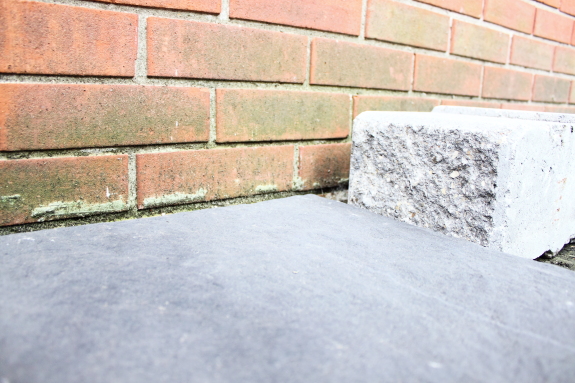 HOORAY!  Turns out I am capable of making a decision!  Oh happy day.  So yeah, at that point I was pretty giddy (and I’m sure you can guess that the Mr. was quite relieved that the whole process only took about 30 minutes instead of all freakin’ day), so then all we had to do was plan our layout.  And for that, we wanted to keep it simple.  The current patio was 13’x25′ . . . 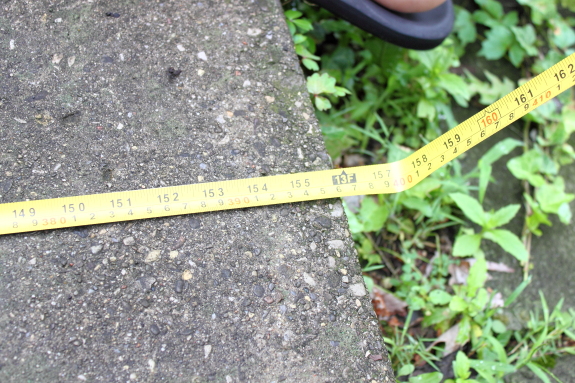 And had this odd wood and brick wall that looked incredibly slimy and not so much on the up-and-up as far as stability goes . . .

Oh, and not to mention that the backyard is basically a GIANT jungle at the moment.  That picture above was taken a few weeks ago.  Here’s a similar shot taken a few days ago: 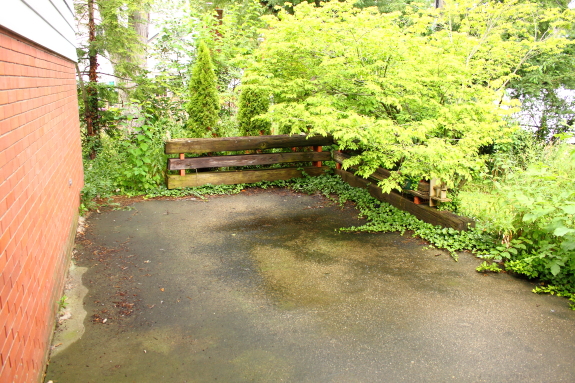 Notice how the ivy is trying to completely engulf the concrete slab?  Oh, and that walkway to the left of the little wall–yeah, that was impassible. 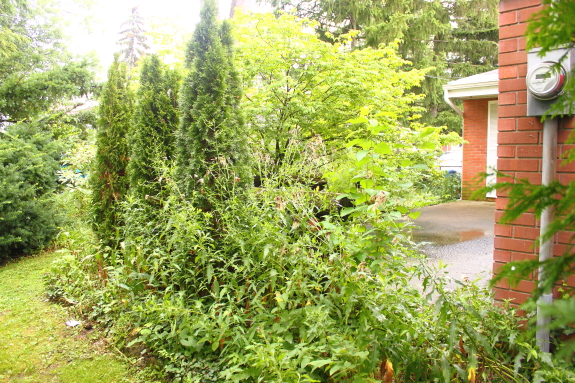 Somewhere under those weeds are some steps to actually get onto the patio.  Good luck with that, huh?

Basically, our plan is to rip everything out.  I know, I know, the nature lovers in you are screaming at us (and I have to admit–I’m a little upset too–I’d like to at least save some of the intentional plants), but it’s just such a mess that the best plan is to really start at the beginning.  Plus, with the demolition of the patio, it would basically be impossible to try and save anything anyways.  Or at least, that’s what I’m telling myself to get to sleep at night.

Okay, but back to the design–we actually like the current configuration, so we’re thinking of keeping it with only a slight modification.  Essentially, the new patio will look like this: 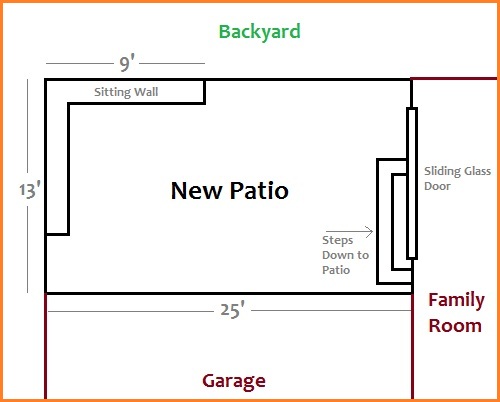 Since we’re going to be digging the patio down to ground level, that means that steps will be needed to get from the sliding doors in the family room to the new patio.  The wall will be nine feet on each side, and it will be ~21″ high, which is a good seating height.  That leaves a 4′ walkway off the patio to the left, and then a large opening off the top of the patio.  I’m envisioning getting a table that will fit into that corner, allowing for seating on two sides of the table.  Making the wall an equal length on both sides allows me to orient a rectangular table in multiple configurations (horizontally or vertically in the picture above).

Our backyard isn’t all that big (it only goes out to that chain link fence), but once we add in a 6′ privacy fence, we think the patio will have a nice, cozy feel to it . . . 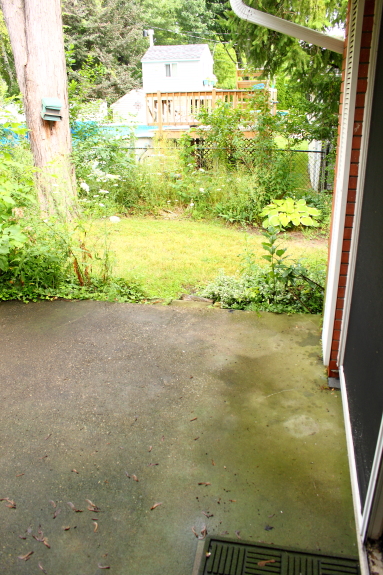 Here’s another shot of the backyard from the back of the house . . . 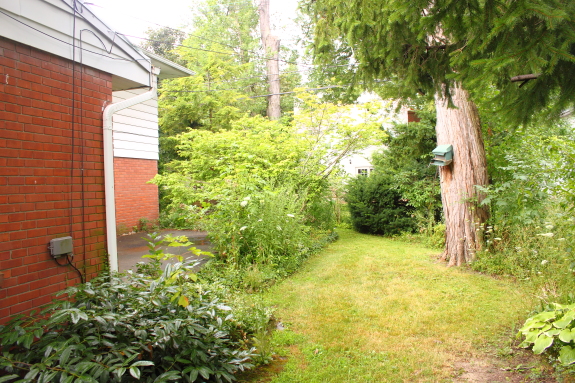 So there you have it–paver decisions made!  Oh, and I picked a pattern.  I originally wanted to do a subway tile pattern using just the 16″x24″ pavers, similar to this one:

But after realizing that it would be the same as the brick wall, I decided that it would just be too busy.  Too much of the same pattern could make it look overwhelming (in my opinion).  So instead, I chose the 3 Tile Herringbone pattern (sorry for the small size, but that was all that was available on Hanson’s site):

I think mixing in all three available sizes in a large-scale pattern will make it disappear a bit more than if it was a continuation of the wall.

So there you have it!  Decisions made all around.  Of course, that meant that it was time to go back to Weckesser Brick and find out what the damage was going to be.  I had a rough estimate based on the price sheet they gave me, but I wasn’t sure how to calculate the wall, or really how many pavers would be needed.

Turns out that with the pattern I chose, it required equal numbers of each size paver.  The Hanson site has a calculator to figure out how many pieces you need, so I won’t go into that here.  Plus, you have to buy this stuff from a dealer, so they know what they’re doing and can make the calculation for you (plus one extra paver for each size for good measure).  Turns out we needed 37 tiles of each, and at $20.45, $13.65, and $9.10 each (for each of the 3 sizes), that meant it was going to cost some moolah.  See, the large pavers are by far the most expensive option (averaging around $4-$6 per square foot) as compared to clay bricks (around $2-$3 per sf) . . . 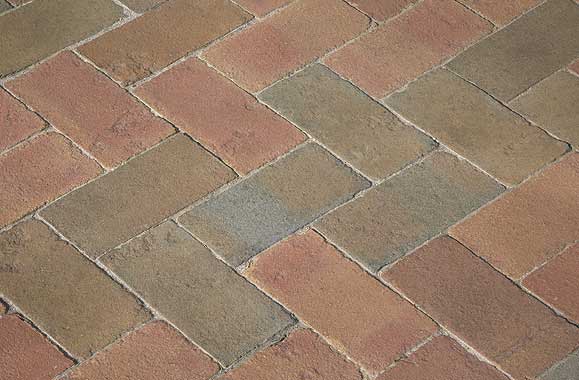 Of course.  What else, right?  I have expensive taste–what can I say?

The wall was a whole ‘nother story–at $6.85 per brick, and with over 150 bricks needed, in addition to the top pieces and adhesive, well–it was going to be a pricey addition.  Oh, and since the wall and pavers were going to weigh over 11,000 pounds, it was unrealistic that our contractor was going to be able to pick them up (he could, but it would require multiple trips, and it just seemed like a potential waste of time), so we opted for their delivery–another $200 (since they’d be going to Buffalo which is outside their normal delivery area)!

Just to make me feel okay about the cost of the project, I decided that I needed to at least try shopping one other place.  So I called Scranton’s Thruway Builders Supplies in Depew, NY.  They were another authorized Hanson Hardscape dealer.  And I’m glad I called–not because I got a cheaper price (I didn’t–their pavers were $21.65, $13.65, and $9.55 for each size), but because I got some peace of mind–Weckesser’s prices were better.  In addition, my Weckesser Brick rep (Don) also gave me even better prices than what were listed on their own pricing sheet (since I was buying such a large quantity; when I ran the calculations, I think the total discount came to ~$200 since that was the difference between the price sheet and what he finally quoted me–not much, but every bit helps I guess).  And, Scranton’s was still going to charge $95 for delivery even though it was located just outside Buffalo.  So all in all, I felt satisfied that I was getting a decent deal.  Not a great deal, but a decent deal.

So what was the FINAL damage?

Total thus far = $3,113.40
Yeah–not cheap.  BUT, outdoor spaces are known to be good investments, so we have faith that this will be money well-spent.  Fingers crossed that it comes out looking amazing!
So what do you think?  Do you like what I picked?  Would you have gone in a different direction?  Do you think I got hosed on the price?  If you do, I’d appreciate you keeping that to yourself since the deal is done.  🙂