After visiting Zion National Park and displaying our superior hiking abilities (yeah, our heads may have gotten a little big, but we were on vacation, so it’s okay, right?!), we headed to Bryce Canyon National Park.  Lucky for us, everywhere we visited, Blue Monkey Mike gave each of us the official government pamphlet for the park so that we could read up on what we were about to see. 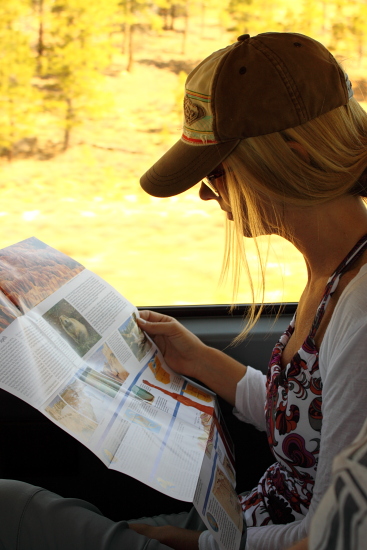 And luckily, to get us in the right spiritual place to see the park, we had Carrie to guide us in some quick yoga.  (This was one of the best kept secrets of our trip–Carrie is hands-down one of the best yoga teachers ever, and the Mr. and I got some private sessions with her during our adventour; so if you’re in the New Smryna Beach, FL area in the near future, you have to book a private session with Carrie through Brahma Living!  Seriously–it’s a must.)

Once our minds were clear and our bodies stretched out, our first stop was at Rainbow Point.

Oh, and see that little white spot on the stump in front of me in the picture above?  Yep–that’s snow!!  There was a whole big pile of snow still at Rainbow Point, even though it was in the 60s, and less than a few miles away in another part of the park, it was in the 90s!  Isn’t science (or is it meteorology) cool?

And of course, where there’s snow . . . the Mr. will make snowballs.

Lucky for the Mr., the kids loved him and were more than happy to play his games (saved me from taking a snowball to the face too, so thank you boys!).

We started at Rainbow Point with a short hike around Bristlecone Loop.

The best part of Bryce Canyon was that it was such a respite from our previous days at Zion–there were far less people there, so it really gave us a chance to absorb our surroundings (don’t get me wrong–Zion was fantastic, but at Bryce we found a whole new level of peace). 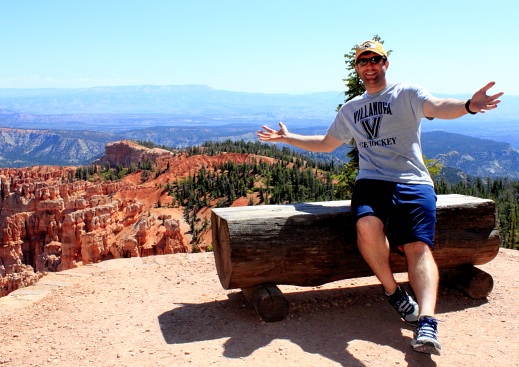 And maybe just a bit of danger (the Mr. wanted to head in that direction, regardless of what the sign said . . . ) 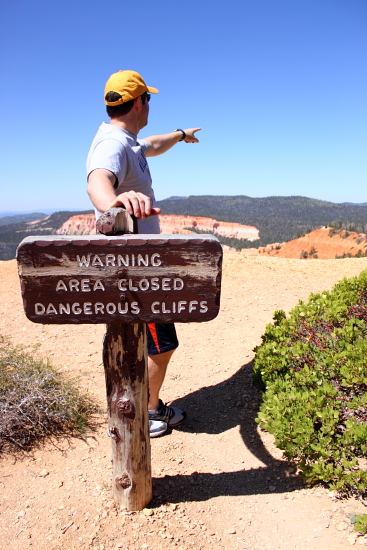 The Mr. didn’t have his smart hat on–he even admitted it upon looking at this picture . . . one misstep and the trip would have turned out much differently for him (mine would’ve likely been the same though 😉 ).

Once we wrapped up at Rainbow Point, we hopped back in our Blue Monkey van and headed north to Sunset Point, the start of our next hike.  We parked at Sunset, and walked a short way along the upper trail to Sunrise Point . . .

From there, we headed down into the canyon to get a closer look . . . 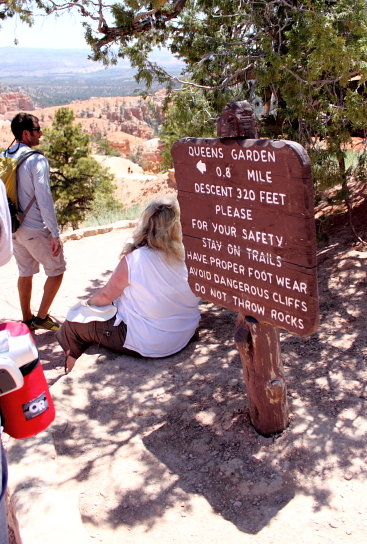 The views in every direction were stunning . . . 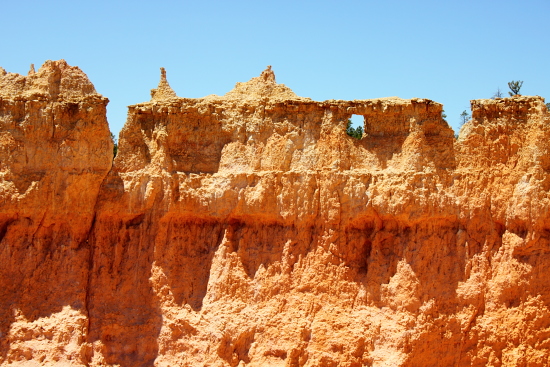 and the colors were so rich and varied . . .

It was difficult to even take a moment and find your center, but Carrie made a point of it . . . 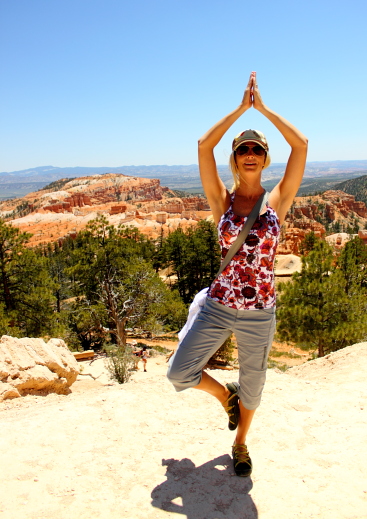 The hoodoos are defined as “pillars of rock, usually of fantastic shape, left by erosion.”  And boy did they live up to the whole “fantastic shape” concept: 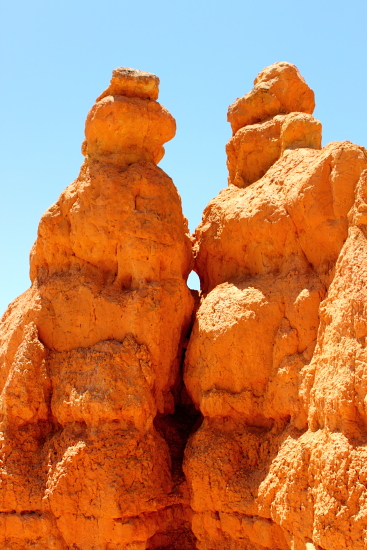 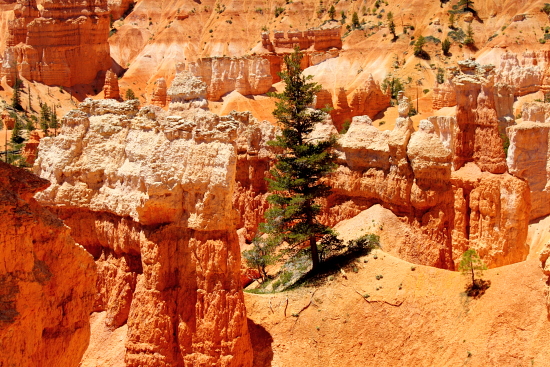 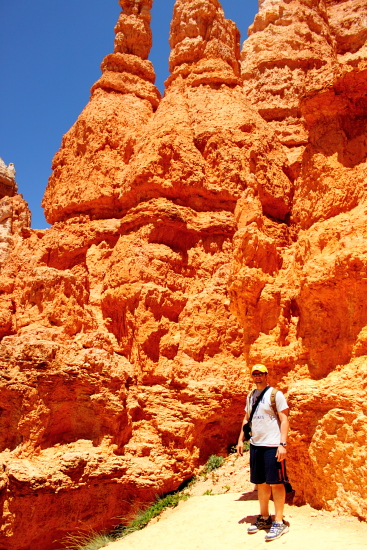 It’s hard to get a sense of the scale with these, but it was truly impressive.  And the trail wound around all of it, which made for some interesting photo ops . . . with Blue Monkey Mike:

And with some of the family that was part of our group . . . 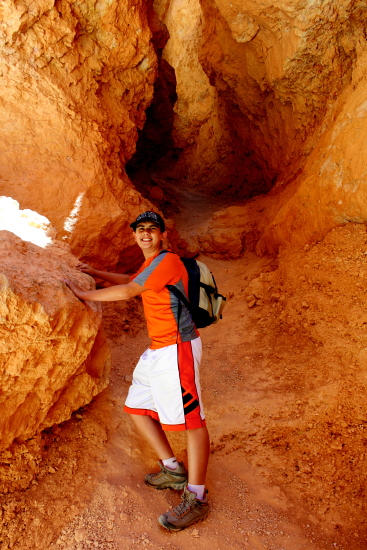 One of the best parts of the trail were the carved tunnels along it . . .

They were perfect for doing your best Peter Pan impressions . . . 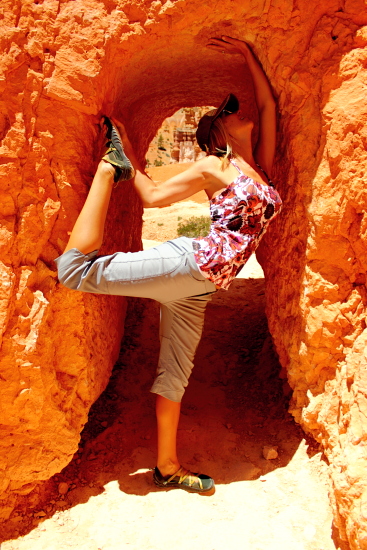 The hike became pretty challenging at the end when we had to head back up . . . 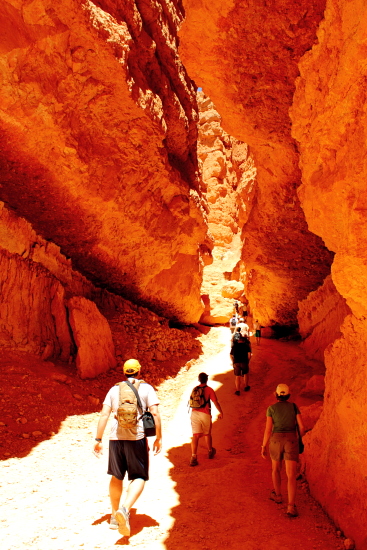 But the feeling of accomplishment was well worth the effort (apparently the Mr. and Daniel thought they were the first people to ever climb up to Sunset Point, hence their #1 declarations): 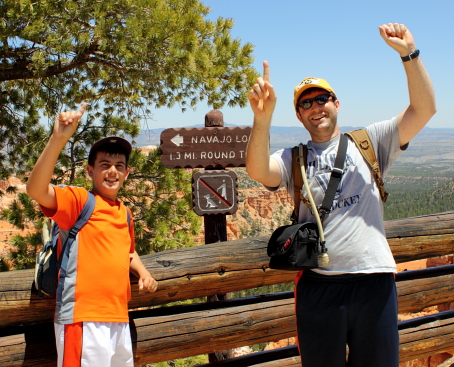 The view from the top was truly inspiring–can you believe Mother Nature made all this?!

When we had all regrouped at the top of the trail, we were greeted by a pleasant surprise: a Park Ranger was giving a presentation on how the canyon was formed (I’d like to say I completely remember the high points of his talk, but I was kind of hungry at the time and he was using a pizza analogy to explain it all, so all I can tell you is that it has something to do with pepperoni, mushrooms, and lots of different cheese layers).

Oh well; off to our next adventour!