The Mr.’s next big idea?  Stand in front of the New York Stock Exchange acting like a crazy man everyday . . . shouting out ticker symbols, placing imaginary buy and sell orders, and doing the frantic hand signals that you see in movies like Trading Places.  He thinks he could become famous that way . . . umm, sure honey.

Needless to say, I shot that idea down.  But that didn’t put a damper on our 24-hour trip to New York earlier this week.  I had to travel for work, so the Mr. came with and did his own work in the city.  Since it was such a short trip, we only had about 3 hours of downtime to eat dinner, walk around the city, and take in the sites.  Of course, since we were staying in the Financial District, the only sites we partook of were Wall Street,  the NYSE, and the Bull.  Thrilling, I know–we’re dorky like that.

The Mr. was convinced that this was the site of the Apprentice expulsions, but I disagreed . . . I think they walked out of the other Trump Tower and not this one.  Anyone know the answer?

And of course, since we were in NYC, we encountered an interesting character . . . all dressed up at 9:00 PM on a Monday night and nowhere to go?  Poor guy.

That is, except for a photography shoot on the Bull . . .

Seriously?!  How awesome was that guy?

So yeah, it was a quick trip.  We had dinner at Mad Dog & Beans where we scarfed down unlimited tacos (don’t worry–they were only the size of my thumb . . . that was the second time we’ve been in NYC and had tacos made for miniature people–what’s up with that?) and the strongest margarita I’ve ever had.  We tried hunting around for a sweet treat, but nothing was open except for the worst place on earth, aka McDonald’s. 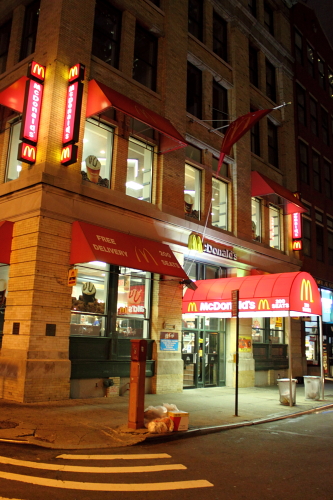 Joanne–don’t hate me, but we went in.  And we ordered.  McFlurries.  And we ate them.  And they were good.  But if it makes you feel any better, I sort of felt like this afterwards:

So that’s it–our little break from the never-ending disappointment of house-hunting.  Sigh.