Every Saturday, flocks of people head to the Rochester Market to browse, shop, eat, and get a bargain.  Moose (my father-in-law) had told us about the pilgrimage, proclaiming how much we would love it because of two things:

Now, Moose basically had us at one word: cheese.  We love the stuff so much that some days we even like to pretend we’re European and dine on a crusty baguette, a few varied cheeses, and a robust Cabernet for dinner.  Of course, we probably eat way more of it in one sitting than most Europeans, and we doubt that Yancey’s Fancy Buffalo Wing Cheddar usually makes the cut on most Parisian tables, but still—we at least like to pretend we’re refined.  (Yancey’s Fancy is a local cheese producer located about mid-way between Buffalo and Brockport; they make a wide variety of cheddars, all of which are available at Wegman’s, so needless to say that when Mr. Bunches caught a glimpse of a combo of Buffalo Wings and Cheddar Cheese, you know it ended up coming home with us.)

So off we headed to Rochester one Saturday afternoon in hopes of snagging some awesome cheese, and maybe some local booty too.  I’ve always loved a good farmer’s market, and in Boston you can easily get spoiled by the sheer number of them that descend upon the city every April . . . I even had one right outside my office, so buying local was simple (which was a good thing since Mr. Bunches wasn’t always up for farmer’s markets—whenever I would spot one on our travels around town, he liked to say it was closed and we’d have to go another time . . . real nice, huh?  But one of our agreements upon moving to NY was that every market was going to be “open” from now on.  That’s right—Mr. Bunches was going to become a farmer’s market groupie . . . I wonder if that might look something like Vacation Bunches?)

First stop: Cheese Store (which we learned upon arriving was called VM Giordano Imports) where the sheer variety was overwhelming.  And with free tastes of anything they had, we probably could have spent hours in there! 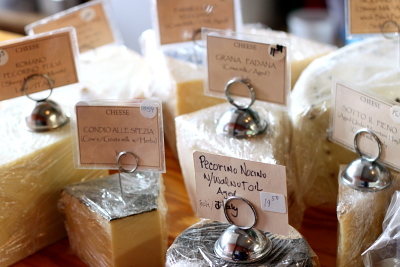 And of course, Moose knew the owner, so we got tastes of everything and left the place with about a pound of cheese (we chose Manchego and an aged goat cheese), a bunch of olives, and some fresh-pressed olive oil from that little farm in Italy he’d told us about.  This place was awesome—you could even order fresh made sandwiches in the back (they had a whole assortment of imported meats, pastas,  you name it . . . it was quite the gourmet find).  Score one for the Moose!

Now, Moose says it’s only open on Saturdays, the market day, but I’m not so sure he has that right . . . okay, I just checked their site and they have open hours on Thursdays as well.  Phew.  Crisis averted.

After gorging ourselves on all that is good from cows, goats, and sheep, we headed into the market to peruse the “local” goods Moose promised.  Now, since Moose already delivered on some pretty outstanding cheese, I had to cut him a little slack on his definition of local.  I don’t know if we just haven’t been to the right parts of Western New York, but I haven’t seen a single citrus tree yet . . . 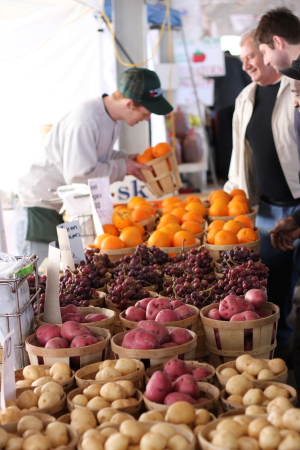 Sorry to burst your bubble Moose!  But all was not lost . . . some of the vendors were in fact local.  And one was our most favorite type of vendor: WINE!  Nothing like some northern NY wine to go with that pound of cheese we just picked up, right?

And with free tastings, how can you go wrong?!  Moose was on quite the generous kick and bought us a bottle of our favorite: Thousand Islands Merlot.  I’m thinking it might get even better with age, so we’re probably going to hold onto it for a little while.

And yes, that’s another Mozzeroni’s box in the back . . . we just can’t seem to get enough of the good stuff!

So all in all, the trip to the market was definitely worthwhile, and I can’t wait to see how it expands during the summer months . . . with all the fertile land in WNY, I’m sure the local produce offerings will grow exponentially.  Until then, at least now I know a good place to pick up some beans: