After much preparation and practice, the wedding day finally arrived.  Oh happy day (and, coincidentally, Happy Earth Day, since it shared their April 22nd nuptial date).  Just an fyi–this post is going to be pretty picture heavy to satisfy all the family requests–and thanks so much to my sister’s girlfriends for sending me their pics so soon!  (I have something special planned for all those pics, but more on that later.)

First up: Alcohol.  What else, right?!  My sis’ good friend, Punkie, gave her a bottle of champagne from Mumm Vineyard, so Doodles did the honors to start the glamification session off on the right foot . . . 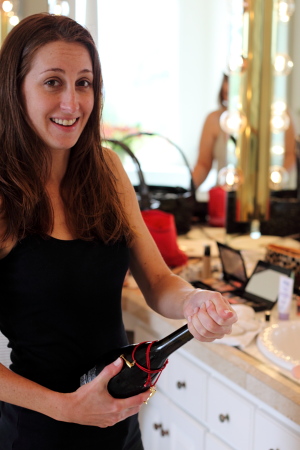 Next up was hair and makeup at the estate by the future sister-in-law, aka all-around magic-maker, Bre.  Basically, she’s a genius and she made everyone look beautiful for the big day: 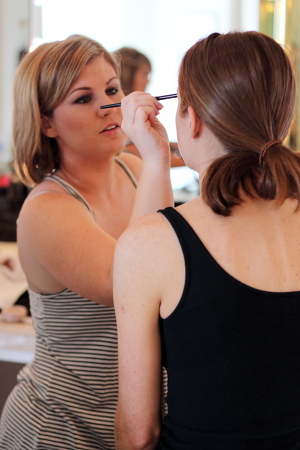 Of course, it wasn’t only time for the grown-ups to get ready . . . the flower girl was all sweeted up too!  Don’t you just love that dress?!  (From Etsy seller SweetPlume.)

But the most important dress was just for the bride . . . doesn’t she look angelic?  Sigh.  My big sis.  I may have cried.  A little.  But not so much as to ruin Bre’s magic.

Then we were off to the races (of course we were running a little late–I mean, Bre had to work some serious MAGIC–not on my sister of course, but most definitely on me 😉 ).  The bride and groom had planned to see each other before the ceremony in order to have that first look captured when he laid eyes on her; and so they could have a moment with just the two of them.  Plus, they then had an opportunity to get lots of pictures out of the way so they could get straight on to partying after the ceremony.  Now, for all those first look shots, we’ll just have to wait for pictures from their photographer, but here’s one of the bridal party:

And some random family and friends’ shots while we all waited around: 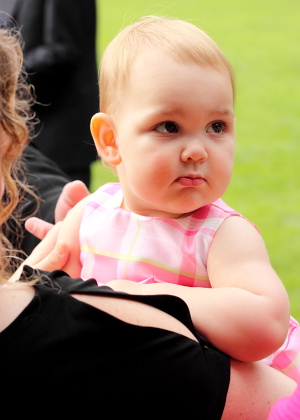 Once all the pictures were done, and the guests had arrived, it was GO time!  Again, forgive me a little for a lack of pictures here since I was busy walking and standing (all that practice really helped, except who knew I’d be so shaky from nerves?!), and Mr. Bunches was the official videographer, so he was sans camera as well.  But with 2 professional photographers on site, I’m sure there will be great pics to come.  For now, though, here are some shots taken by the other guests: 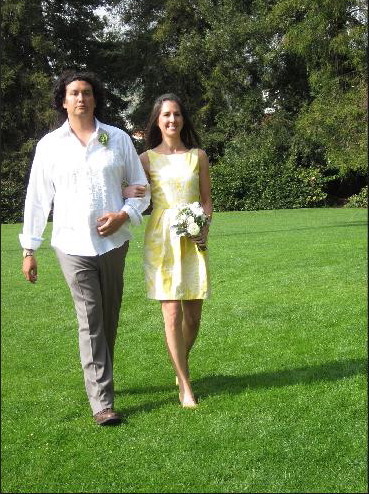 Luckily, I had the best man to hold onto . . . otherwise, my heels could have been disastrous.  And thank goodness my mom had the bride to hold onto!  We thought she’d cried it out at the rehearsal, but clearly not . . .

And true to form, Uncle Tree gave quite the performance . . . from laughter (and maybe some drooling?  I’m not quite sure what he’s doing in this shot) . . . 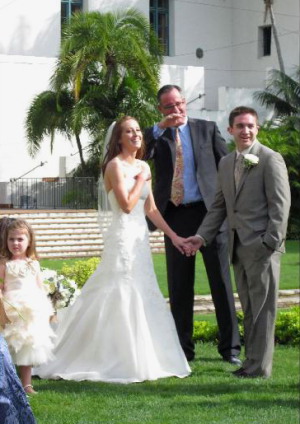 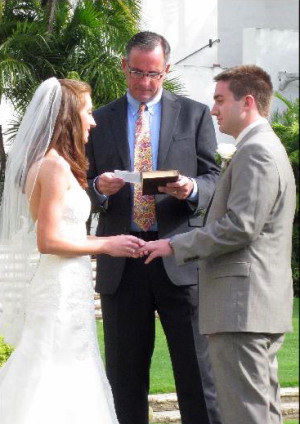 . . . and a little singing and dancing thrown in for good measure.  His rendition of The Jungle Book’s Bear Necessities almost stole the show:

That is, of course, until Josh’s  major smooch really stole the show:

Everything went off so smoothly and it was such a fantastic ceremony.  I can hardly believe that my sis is all growed up . . .

What was especially amazing, though, about their big day was that it started out pretty overcast, but right before the ceremony started, there was a break in the clouds that allowed the sun to shine through!  And it kept on shining throughout the entire ceremony, only to go back into hiding once they finished their walk out.  I think it was a sign  . . . just like the other weather signs that came later that night . . . I’ll dish all the details about that and pics from the reception tomorrow.  But for now, some more bride and groom eye candy: